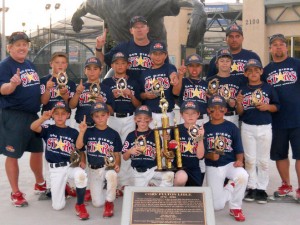 As the oldest and most elite baseball program in San Diego, the STARS are fortunate to attract the very best young talent in San Diego County. Among many other reasons, this is because we spend every year training our young players the fundamentals of the game of baseball. Six weeks of clinics are conducted with our players before they play their first game. This is why every summer our boys compete at the highest level at various World Series competitions. Our coaches spend much of their time not only teaching the game of baseball but also teaching life lessons, including:

We are very proud that the San Diego STARS have led the way for 30 years!

Coach Gabriel has been coaching baseball in San Diego since 1984. He was inducted into the AAU Hall of Fame in 2005 and continues to be one of the most recognized and sought after baseball coaches in San Diego County. Coach Gabriel has produced an award winning Baseball instructional video series – “The Making of a Champion…” Read More

Coach Rees is a highly skilled pitcher who is recognized as one of the most desired pitching coaches in San Diego County. For more than a decade, coach Rees has been asked to tutor top San Diego County pitchers. If anyone can teach you how to pitch, it is coach Rees…Read More

Coach Esquerra specializes in instruction and demonstration of mechanics of the swing and has invented various techniques and products designed to enhance hitting performance of players at every level of baseball. He strives to teach each player how to swing and hit effectively and with maximum level of skill…Read More