About the San Diego Stars 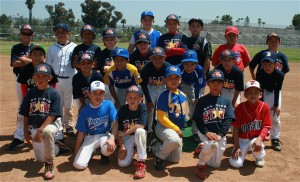 The STARS have won 27 National tournaments and six times San Diego STARS teams have ended the season as the number one team in the Nation.

41 San Diego STARS players have gone on to play professional baseball and 13 of those players were drafted in the first round.

“If you want your child to play his best baseball, you need to take him to where the best baseball is being played”!